Rafa Mir is very much building his name in Spanish football, and that can only be a good thing for Wolves’ investment in the player.

Signed from Valencia in the last winter window, Mir was loaned out to Las Palmas for a season in the summer.

Earlier this month the local media there dubbed Mir a ‘bullet wasted on the bench’ and demanded he get more chances starting for the Canary Island club.

It’s been a similar story with Spain’s U21 team and on Thursday evening the Wolves owned player was again on the bench as his country played away to Albania.

Coming on for Real Madrid owned Borja Mayoral with around 25 minutes remaining, the 21 year old scored the only goal of the game in the 84th minute, winning the match for Spain. 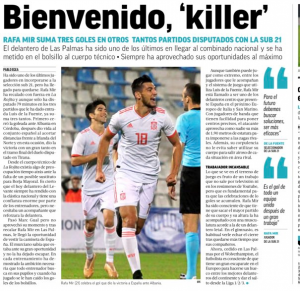 Playing 79 minutes across 3 matches for Luis de la Fuente, the forward has three goals to his name, and again there’s suggestions he needs to be given a bigger role.

West Ham have ‘taken concrete steps’ for signing – Made contact with club, €10m offer is ready

West Ham have ‘taken concrete steps’ for signing – Made contact...

Tottenham player ‘eager to travel’ to complete transfer – €4m a...