Sunderland owned defender Papy Djilobodji has told the French media a Premier League club tried to sign him last month. The Senegal international is currently on loan with French side Dijon.

Speaking to L’Equipe the defender, contracted to return to the Stadium of Light, was asked about joining Dijon, and whether there was interest from other clubs: “On 30th August, when I had already given my word to Dijon, a Premier League club contacted me. But I did not see myself going back on my word.

“I felt the president (Olivier Delcourt) and the coach (Olivier Dall’Oglio) were 100% motivated to sign me and I absolutely want to give them their confidence.”

With Sunderland’s relegation to the Championship it always seemed likely Djilobodji would leave the club in the last window. 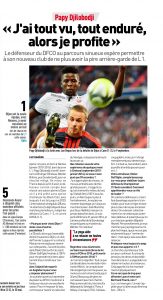 The 28 year old played just 18 league games for the Black Cats last season, and with the arrival of Simon Grayson in the summer he was surplus to requirements.

Djilobodji signed for Sunderland just over 12 months ago from Chelsea for a transfer fee in the region of £8m.

The player arrived in England in 2015 when he surprisingly signed for Chelsea, but never made an appearance for the West London club.

Given Djilobodji’s season with Sunderland, and the collective disappointment, it’s surprising a Premier League club made a late effort for the player.