Earlier this month, Sheffield Wednesday were first linked to Bongani Zungu from Vitória Guimarães. Carlos Carvalhal’s side were said to be ‘well placed’ in the race, with A Bola claiming a deal could be found for around €3.5m.

Then there was an update from O Jogo saying the player would not be sold. Zungu is considered to be too important for the Portuguese club, and that’s why he was labelled ‘untouchable’ by them. Only a really big offer would convince them to sell, making a move pricy for Sheffield Wednesday.

But it seems Zungu is not that convinced he’s staying. The midfielder has spoken to the African press this weekend, and made it clear it’s very possible he’s going to be sold in the next transfer window. 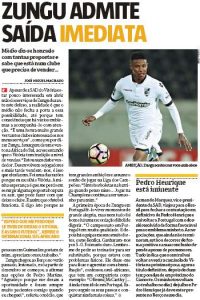 “It’s a very big honour to see so many clubs interested in my services,” Zungu said (via Record).

“I’m at a selling club. They develop players and later sell us, that’s what they do. It’s one of the reasons why I came to Vitória. My hope is that they allow me, if I get some good offer, to leave. That’s how football works. And I say that because people in Guimarães like me, they appreciate my work.”

The quotes make it clear he’s not concerned about the situation. Record doesn’t mention which clubs would be leading the race for him now, although when the Sheffield Wednesday interest was reported, there weren’t any other clubs linked.