Home Championship Sheffield Wednesday target becomes ‘untouchable’, will be hard to get him now
SHARE

Carlos Carvalhals side had been linked to the player last week, when the Portuguese and South African press said the club were determined to win the race to sign him.

But according to O Jogo today, he’s not being sold by Vitória and is ‘untouchable’. The Portuguese side plan to block all attempts in this transfer window and offer him a new contract once he’s back from vacations, since his current deal expires in 2018. 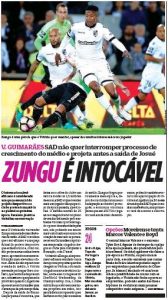 The newspaper claims the club believes that Zungu can be worth much more money in the future, and keeping him would also be crucial for the team.

Last week, A Bola claimed that €3.5m could be enough to take him. Of course every player has a price, especially in Portugal, but it seems Sheffield Wednesday will now have to make a more convincing offer if they really want to land the player this summer.