Sheffield Wednesday are said to be ‘well placed’ to sign the South African midfielder Bongani Zungu.

As reported by Portuguese newspaper A Bola today, the player should be leaving Vitória Guimarães after a great season which attracted some big competition for him.

The outlet really puts Sheffield Wednesday at the front of the race, as after being approved by manager Carlos Carvalhal, the player was placed on top of the Owls’ list of signings for the summer. 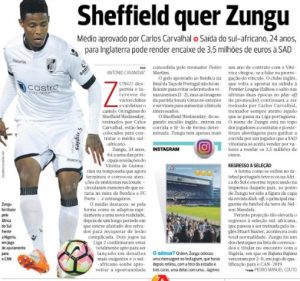 Vitória is Zungu’s only experience in Europe. He was signed by the Portuguese club last January from South African side Mamelodi Sundowns FC.

It’s claimed that the ‘approaches to win the race’ have already been made by Sheffield Wednesday, and Vitória Guimarães are demanding €3.5m for the transfer.

A Bola highlights the fact that yesterday, Zungu posted on Instagram a picture of Vitória Guimarães’ stadium with three sad emojis on it. He deleted the post a few hours later.