In Chile the reaction to Alexis Sanchez’s Manchester United move has been much calmer than in England.

There’s some exictement the Arsenal player should soon be at Old Trafford and that he’ll be playing under Jose Mourinho. One journalist even wrote an open letter to Sanchez urging him to sign for Manchester United.

English media hysteria has been met with a raised eyebrow in Chile and when Martin Keown called Sanchez a mercenary, La Tercera covered it by saying: ‘In London, they’re not taking the departure of Alexis Sanchez very well’

Keown labelled Sanchez ‘the biggest mercenary in football’ in a strop for the Daily Mail.

Now, La Tercera have spoken to Robert Pires and asked his opinion on the upcoming Manchester United signing.

On the mercenary label, the Arsenal legend said: “No, he is not a mercenary. Martin is my friend, but I don’t think you can say that. That’s football, and if City does not want Sanchez anymore, it’s their problem. And if United wants him and is willing to spend a lot of money, good for him. But for me, Alexis wanted to stay at Arsenal. I have not talked to him, but what I see, what I smell, is that he was very good in London, very good in Arsenal. What Alexis wanted was for Arsenal to spend money on other players.”

Asked what Manchester United gain and Arsenal lose from the deal, Pires said: “Arsenal loses a great footballer. With a lot of quality and, above all, a winner. It is the most important, always want to win. So, if tomorrow he goes to United, they will be very happy there.”

On claims the deal is costing Manchester United £180m and whether Sanchez is worth it, Pires explained: “I think so. And why not? I don’t care about age. The best age for a player is between 28 and 33 years. We are talking about Alexis, one of the best Chileans. He was in Barcelona and he did well. He arrived at Arsenal and he did very well. If you spend £180m on a 29-year-old player, it’s simply because it’s deserved.”

Pires was asked about Sanchez’s legacy at Arsenal and how he’ll be remembered, and his reply was again positive for the Chilean: “Alexis reached a level that people like a lot. What the English want to see is a player fighting. That’s why people are in love with him. You can lose one, two, three, four balls, but that happens to everyone, to Cristiano and Messi. That the people in the stands see it. He is always making an effort to recover the ball.

“He has always given his body, his blood, to the team. He is a winner. And it’s what he wants. When he signed for Arsenal, he told me: “I’m here to win titles.” And I like that attitude. People will understand that he was very important for the club.” 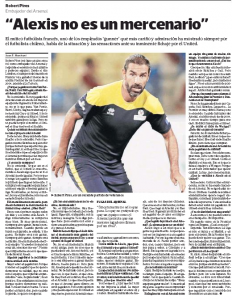 La Tercera then say that ‘in England’ Mesut is seen as the personification of Arsenal’s lack of desire, and they ask the Arsenal legend if that kind of attitude led to Sanchez becoming disenchanted… and Pires isn’t having it: “I think not. There is a good connection between Sanchez and Ozil. But when they see that things are not right, they say “what are we going to do? We try to help, but nobody follows us.” It’s not a question of attitude, it’s that others must also follow. Both have won things.”

On whether it’s time for Arsene Wenger to go, Pires said: “Not for me. The club must sign quality players. That is what they have to do. This club has a lot of money, but has to buy.”

So Arsenal don’t have quality players?: “Yes, of course they have. But you must buy more. You must have two teams. Like City and United. Like Madrid and Bayern. That’s what the team and Wenger are missing. Because he is a good coach who wants quality. There is (quality), but you need more.”

Pires told La Tercera that he doesn’t understand why top players continually leave Arsenal for the club’s rivals and why it’s allowed to happen. The Chilean newspaper suggested they become disenchanted with the the club’s project, to which Pires said: “It must be that. I have been here for a long time and I don’t understand it. But if players like Sanchez want to leave because they feel there is no desire to win here, yes, it is better to leave. What I don’t understand is that a team like Arsenal allows its best men to sign for a rival.

“I don’t get it. I know that’s the way football is, that Manchester United is offering Alexis something that I don’t know if Arsenal can match. But I know that if I have a player like Sanchez, the first thing I do is renew him. And buy other players to make a better team and try to win the league. However, I’m not the coach, I’m not the president, I’m just an ex-Football player from Arsenal.”

On Sanchez showing his dissatisfaction and other players becoming annoyed with that, Pires said: “I’m with the first team every day and I see how Alexis is. And I say honestly: he behaves very well. He is very professional, he always wants to win, even the training. When he loses a ball or a game, he gets angry. And I like that. He is always eager, he always wants to win, he is always fighting. It’s a way of telling the team: “if you do not want to be like that, then I’m leaving.” I think that’s just what Alexis wanted to show.

“Better to have a player like that. Because if you have a player who does not want to show his quality, who is not with the team, if he loses a game he says “OK, nothing happens”, it is not positive. If they get angry with Alexis it’s because he wants to prove his quality. And that attitude is good. You will lose a ball, two, but when you lose it, you want to recover it.”

On whether Sanchez has been sad or lacked motivation in training, Pires said: “No, he’s impressive. There are many things that surround him, but he doesn’t care. Still there, working, with smile and joy. I’m telling you because I was with them recently and he has a very positive attitude for him and for Arsenal.”

Pires believes Manchester United will be “very happy” with their acquisition and that Jose Mourinho will always find a place for Sanchez in his team.

It’s worth noting that in October Pires spoke to Germany’s SportBild about Ozil, and said: “Ozil is a warrior who wants to win something. To me, he seems so angry about the fact that Arsenal hasn’t put together the team with which he can make a difference. Arsenal has spent money only for Alexander Lacazette, €53m. That is not enough to be at the top.”