Here’s a round-up of the latest claims from Germany on Pierre-Emerick Aubameyang’s potential move to Arsenal this month.

German newspapers love calling transfer talks ‘poker’ and Auba to Arsenal is getting that treatment. It’s reported the ‘poker’ is now getting ‘hot’ (another German favourite) after contact was initiated between the two clubs.

However, Borussia Dortmund’s Hans-Joachim Watzke has told Bild: “There was contact with Arsenal CEO Ivan Gazidis, where he informed me that he would like to speak with us. That has not happened yet. There are no current discussions.” 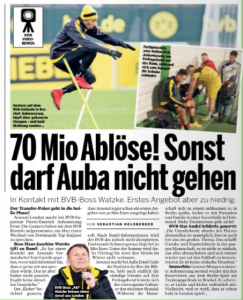 Those comments will have almost certainly been made yesterday, and it’s not clear if they contradict other claims.

Bild touch on Kicker’s claim of a €50m offer arriving from Arsenal and say according to their own information, this an unacceptable amount for BVB.

It’s stated that unless Arsenal meet Dortmund’s ‘pain threshold’ of €70m then Auba won’t be moving in the current window.

Since claiming on Saturday afternoon that Arsenal had made an offer of €50m, there’s nothing new from Kicker.

At the time they stated Auba wouldn’t be going anywhere for under €60m.

Kicker have asked fans what BVB should do with the player: 56% say stick him in the stands, 34% say sell him, 8% say reintegrate him into the team.

Hans-Joachim Watzke is quoted as saying “As always, we say nothing” with regards to the transfer offer.

The local Dortmund newspaper believe Arsenal will have to pay ‘at least 60, probably close to the 70 million euros’.

Another Dortmund big cheese, Michael Zorc, is quoted as saying “The way back is possible. We continue to plan with Auba.”

Olivier Giroud being part of the deal is stated as possible.

What should Arsenal do now?

Pierre-Emerick Aubameyang’s behaviour towards Dortmund hasn’t been good for a while and he’s been openly disrespectful over the past couple of weeks. His teammates are getting fed up with the situation and it’s serving to be a distraction, something Andre Schurrle confirmed publicly on Saturday.

The majority of BVB fans seem to want the player gone and this time it feels he’s pushed his luck too far. However, rather than facilitating a cut-price sale, Dortmund will be determined not to look like a doormat, and need to come out of this with some kind of ‘win’.

That could look like a deal worth a headline figure of €70m with part of that made up of bonuses. Arsenal should be aware Dortmund need the win here and structure their next offer accordingly, bonuses could be based on things like Champions League qualification, number of goals in a season and trophy wins, so that if the Premier League end up paying the full amount it’s been well worth it.

Those bonuses can be difficult to achieve, and Arsenal can purposely weight them in that regard, but it would still give BVB the win they’ll desperately want to present to fans, and a warning to other players that bad behaviour doesn’t result in a cheaper transfer.