Robert Pires has been speaking to German magazine SportBild and when the conversation came around to Arsenal it was inevitable that Mesut Ozil would be brought up.

SportBild put it to Pires that Ozil has received a lot of criticism, and asked the former Arsenal player how he rates the German. Pires was happy to send a huge amount of praise Ozil’s way, and even dubbed the Arsenal player a warrior.

“Ozil is a warrior who wants to win something. To me, he seems so angry about the fact that Arsenal hasn’t put together the team with which he can make a difference. Arsenal has spent money only for Alexander Lacazette, €53m. That is not enough to be at the top.”

The words Ozil and Warrior don’t often meet, but perhaps that Pires was speaking to a German audience made an impact upon his assessment of the Arsenal player. 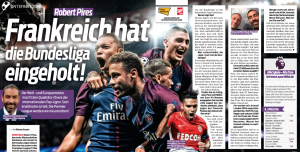 SportBild also asked Pires why Arsenal haven’t managed to stay at the top of English football, and again the Frenchman backed those at the club: “It is incredibly hard to stay at the top in England. But I still believe in Arsenal and, above all, Arsene Wenger. I find it right that he has extended for two years.”

Pires’ stance that Arsenal are letting Ozil down, rather than the opposite, will receive a mixed response from the club’s fanbase, who remain split on reasons for the club’s struggles, but united in a wish for brighter times.