Home Europe Pros and cons of signing player being ‘studied in detail’ by Manchester...
SHARE

Hoe do you solve a problem like Philippe Coutinho? That’s what Barcelona are currently asking themselves, according to Saturday’s edition of Marca.

They picture the former Liverpool player looking like he’s sneezing and throwing cards out on a casino table. The cards have the badges of PSG, Manchester City and Chelsea on then and represent some of the clubs being linked.

A return to Liverpool is discarded, and Marca don’t think Tottenham or Arsenal could afford the player.

Chelsea’s transfer ban represents a problem, but it’s claimed Manchester City are weighing up the pros and cons of a deal, it’s being ‘studied in detail’. The cons are that they already have similar players, and the pros don’t get a mention.

Despite being linked, albeit weakly and strangely, previously, Manchester City’s red neighbours don’t get a mention. 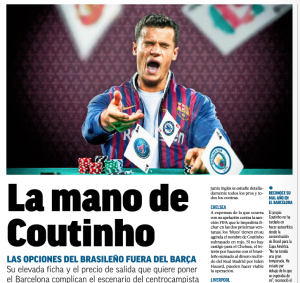 This all feels like hope rather than expectation, and it’s got to be considered unlikely Pep Guardiola would push his club to spend €120m+ on the Brazilian, and with Barcelona wanting their money back that’s what it’d cost.

PSG looks the likeliest, but even that doesn’t feel like a concrete route at this stage.