David Ospina spent last season on loan at Napoli and the Serie A side have the option to make the goalkeeper’s transfer permanent.

The Naples based club have so far not exercised the option and two days ago, CalcioNapoli24 reported the Gunners ‘suspect’ the Italian side are trying to lower the fee to sign the Colombia international.

Saturday’s edition of Gazzetta dello Sport now brings the latest update as they claim Carlo Ancelotti’s side will sign the 30-year-old on a permanent transfer this window.

There’s been a change of stance because Napoli are expected to use the funds raised from the sale of Raul Albiol to sign the South American shot stopper.

It’s claimed Villarreal are interested in defender and are willing to pay the €4m release clause to bring Albiol back to Spain. 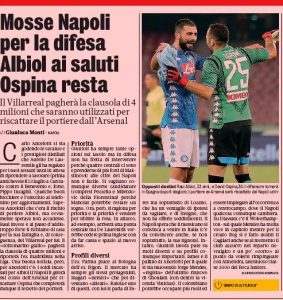 Gazzetta states Napoli will use the money to redeem Ospina and with that, the former Chelsea manager will have three goalkeepers – Ospina, Alex Meret and Orestis Karnezis – at his disposal for the new season.