Although the Portuguese press brings quite a few storeis about Bruno Fernandes today, none of the newspapers seem to be very sure about what’s happening to him.

Local outlets are all certain that Manchester City and Manchester United both want to sign the midfielder from Sporting, but it doesn’t look like things have been developing much.

Let’s start with Correio da Manhã. They bring a story claiming that the player has received an offer of €50m ‘from an English club’.

The club isn’t revealed, and the offer is also not good enough, since Sporting are only letting him go for at least €70m. 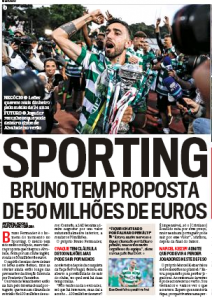 Then we have two stories which favour Manchester City. The first one is from O Jogo, claiming that Bruno’s future will only be decided after the Nations League.

They only mention Manchester City are on top of the list of interested sides, and ‘everything indicates’ that his future will be with the Premier League champions.

Their story is about David Silva’s departure from the club, which would make Bruno Fernandes’ 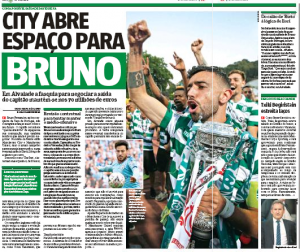 transfer more likely, since he’s a player who has enough potential to replace him in the team.

They also recall that Txiki Begiristain was at Alvalade, Sporting’s training centre, this weekend. Even though the main reason for his visit was the partnership between Manchester City and Sporting, it’s claimed he also made sure to confirm their interest in Fernandes.