At the weekend, reports coming out of Spain claimed Manchester United have submitted an improved offer for Matthijs de Ligt and the Ajax captain was close to joining the Red Devils.

The Netherlands international is currently with the national team preparing for the upcoming UEFA Nations League in June and on Sunday, the centre-back stressed that he will not let the speculation around his future drive him crazy.

It’s given that the teenager will leave the Eredivisie winners in the summer and so far, the star has refused to provide details on where he will play next season.

Monday’s edition of Sport states that after holding discussions with Ajax, the La Liga winners presented a ‘very important offer’ to the player.

The Catalan newspaper does not specify if the ‘important offer’ is the one made earlier this year, or a new and improved one.

The situation with regards to De Ligt could change in matter of hours, just like it happened with his compatriot and teammate, Frenkie de Jong.

However, in the defender’s case, all parties involved have already ‘shown their cards’. De Ligt, in collaboration with his agent Mino Raiola, does not consider the battle for his services is finished yet. 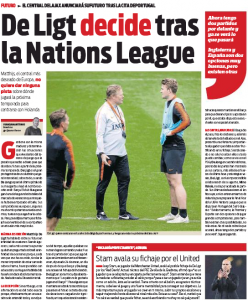 Sport’s report doesn’t mention if United are still in the race for the Ajax player, but does claim De Ligt will make a decision on his future after the Netherlands’ UEFA Nations League campaign in June.

He performs well, Barca will be under serious pressure to do what they need to, and complete the signing.