Home Europe Liverpool player’s name being spoken of ‘backstage’ for what would be surprise...
SHARE

For quite a while, there’d been zero mention of Ander Herrera in the newspapers which are closest to PSG.

It’s still thought the midfielder is signing for the French club, at the end of his contract with Manchester United, but the signing clearly isn’t enthusing those who cover the Paris side.

Today’s edition of Le Parisien does cover the Spaniard, and also talks about another potential free transfer.

It’s claimed James Milner is being spoken about ‘backstage’ at the Ligue 1 champions, and he’s seen as a potential market opportunity.

That’s because they believe the Liverpool player is at the end of his contract, so he’d be another arriving on a free transfer. 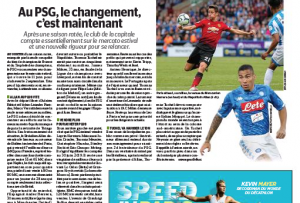 However, it’s far from certain Milner’s Reds contract does expire this summer. There’s been no recent talk about an impending exit, and in 2018, the Liverpool Echo’s James Pearce said he’d checked the date, and the deal runs until June 2020.

If that’s correct, either Le Parisien or PSG have got this one wrong.