On Tuesday, we covered a story from Portuguese newspaper Record which mentioned an approach from Aston Villa and Nottingham Forest to sign the Benfica manager Bruno Lage.

As the article was pretty short and hidden in the outlet’s last pages, there weren’t many details about how it happened, so we could only presume the talks were held last year.

Now as Lage has signed a new deal with the club, Record brings a front page story with all the details of the contract, and also tells the story of his first few months at the Eagles.

Now regarding the approaches from Aston Villa and Forest, Record says they happened before Lage joined Benfica. 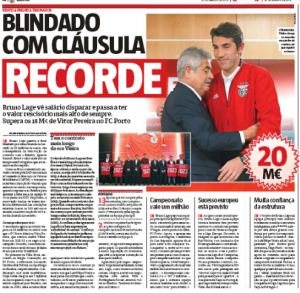 After working as an assistant for Carlos Carvalhal at Sheffield Wednesday and Swansea, Lage took charge of Benfica B in the summer of 2018.

At that time, Aston Villa were about to announce the signing of Roberto Di Matteo, while Nottingham Forest had Aitor Karanka for that entire year.