Manchester City are name-checked in a Saturday article from Marca which covers transfer interest in Giovani Lo Celso.

The 22 year old is currently on loan at Real Betis from PSG and the transfer will be made permanent soon. The French club obviously didn’t expect Lo Celso to do as well as he has this season, and will regret the low €25m price on the purchaser option.

They do have 20% of a future sale, but that won’t provide a great deal of comfort.

Pep Guardiola’s side are said to be keen due to the player’s versatility, and that has ‘placed him on Manchester City’s radar’ ahead of the summer transfer window. 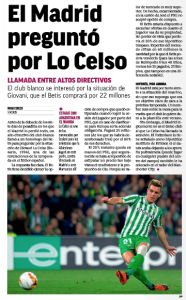 That’s all which is claimed, with Lo Celso said to also be of interest to Tottenham Hotspur and Real Madrid.

There doesn’t seem to be anything especially concrete from any of the clubs at this stage.

A price for the transfer is estimated at €60m.