Home Europe Player won’t take ‘no’ from Glazer family, and is set to...
SHARE

A couple of days ago we covered claims from Spain that the Glazer family have put their foot down over a potential Paul Pogba transfer.

Marca explained they’d made it clear to Mino Raiola that a sale isn’t happening this so that’s that. In turn, the Spanish newspaper made it clear the situation was likely to rumble on, and that wouldn’t be the final word.

Sunday’s edition of Sport reports Pogba won’t take ‘no’ from the Glazers and has submitted some sort of transfer request. The European media seem to have a mythical view of what a transfer request is in England so it’s likely being made into something it isn’t. 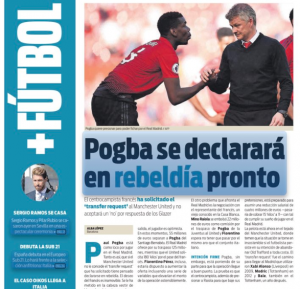 Pogba is said to have convinced himself he’ll be wearing Real Madrid’s shirt next season, and is willing to kick and scream until he gets his own way. According to Sport, the Frenchman is ready to ‘rebel’ against the Premier League club.

Madrid are said to be willing to pay €125m, and it’s claimed Manchester United want €180m.