It’s relatively quiet on the Bruno Fernandes front… or is it?

As we’ve explained a couple of times over the past week, the story isn’t having the huge claims it has enjoyed previously, and now Tottenham are slipping out of the picture.

With Christian Eriksen moving to Real Madrid currently looking unlikely, Spurs’ need for Bruno lessens, and so other clubs have been dragged into the situation.

Atletico Madrid have popped up several times, and now PSG get their turn. Correio da Manhã report Leonardo, who has just returned to the French club, has excellent relations with both Bruno’s agent and the player himself. They don’t explain why.

Manchester United are still ‘best placed’, along with the other two sides named, and Sporting want to ‘accelerate’ the player’s exit. Therefore a departure is described as ‘imminent’ and it’s claimed things ‘should be advanced soon’. 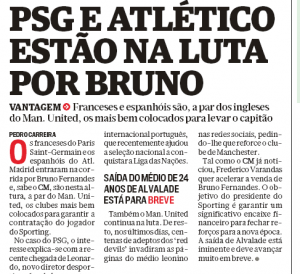 On one hand, this all feels quieter than it was a couple of weeks ago, and on the other Correio da Manhã reckon it should all get moving soon.

They also mention Manchester United fans have been all over social media pushing for the player’s transfer to Old Trafford.