Reports coming out of Bulgaria and Belgium suggested the midfielder’s transfer to the Etihad should be sealed in the coming weeks and he would then be loaned out to SK Lommel in January.

The Premier League club’s owners, the City Football Group, added Lommel to their stable in May.

Today’s edition of Het Nieuwsblad explains the 18-year-old seemed to be ‘on his way to Manchester City’ for an amount of €2.5m.

However, there has been a new development over the weekend and the newspaper states the Bulgaria U19 international will not join City and instead, he will sign a contract directly with Lommel until 2025.

According to the report, Krastev will immediately be loaned back to Slavia Sofia and he will join the second division Belgian side at the start of next year. 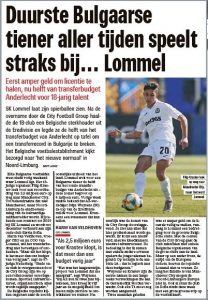 With the transfer expected to be completed soon, the player will become the most expensive teenager.

Het Nieuwsblad state Lommel’s new COO Harm van Veldhoven has neither confirmed nor denied these claims. He also adds, “If [claims of] €2.5m [fee] were true for Krastev, that’s more than our budget last year.”