By now, you’ll be well aware that Mino Raiola is trying to get a move sorted for some of his clients this summer, including both Henrikh Mkhitaryan and Justin Kluivert.

The instructions for the latter come directly from AS Roma, who are looking to make a profit on the Dutchman, so the idea was to somehow include him in the negotiations for the Gunners’ Armenian, thus killing two birds with one stone.

However, there appears to have been a difference in player valuations over the past couple of weeks, and no agreement has been found as of yet.

This doesn’t mean everything is dead in the water, as Gazzetta dello Sport explain the ‘talks with Arsenal are still in place’ for Kluivert, who is of interest to clubs in England.

The problem with all this talking is that both the Netherlands international and Cengiz Ünder, also at the centre of transfer rumours, ‘seem distracted’ by what’s going on, leading to less than satisfying performances on the pitch recently. 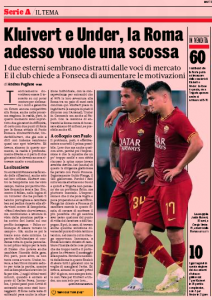 Kluivert, for example, was the first to come off in the 2-0 loss against Milan, while his Turkish teammate never even made it onto the pitch, with Fonseca preferring to turn towards the likes of Javier Pastore and rarely used Nikola Kalinić to try and change the game, to no avail.

It’s a bit of an issue, as poor performances don’t help player values, so Roma have asked their manager to try and ‘increase the motivation’ in the squad, so that results go their way, thus putting their sellable stars in the best light possible.