Filip Krastev, of Bulgarian side PFC Slavia Sofia, is set to join Manchester City in the coming days.

This has been confirmed by Slavia Sofia chairman Ventseslav Stefanov, during an interview with Bulgarian outlet dsport.

It’s claimed the 18-year-old has already completed his medical with Pep Guardiola’s side and the transfer is expected to be sealed next week.

Despite a deal being agreed for Krastev’s transfer, the midfielder will not be joining City in this calendar year.

“It recently became clear that Philip performed well during the tests. Everything went well. Now he will return to Bulgaria, and at the beginning of next week we should finalise the deal. Manchester City like him a lot. He will stay to play at Slavia until the winter,” Stefanov said.

Slavia Sofia have also confirmed on their official website the teenager should sign his contract with the Premier League winners next week.

“The parameters for the transfer of Philip Krastev to Manchester City have already been specified. The contract will be signed next week and will be announced to the public as soon as it is finalised. We urge the media not to bother Filip Krastev, who continues his preparations with the team for the upcoming matches of the championship,” a statement read.

Belgian newspaper Het Belang van Limburg states Krastev will not be part of either City’s first team or their academy at the start of the next year, despite signing a ‘multi-year contract’. 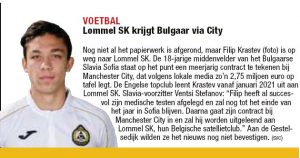 That’s because the player is expected to join Lommel SK on loan in January 2021.

The Etihad club are owned by the City Football Group and the latter added Belgian side Lommel SK to their stable last month.