Marca have a big Tuesday story about Gareth Bale and a potential return to Tottenham Hotspur.

They’ve raised similar claims before and it’s often felt more like hope than expectation, with the same being true today. Previously, the claims would be around a loan move, and now it’s stated Spurs would be ready to pay €50-60m for the Welshman.

In the article’s detail it doesn’t actually say Tottenham have officially offered that, just that they’ve told Real Madrid they’d be prepared to pay such a price.

Even if any of that is believed, there’s then the question of salary. Marca say Bale currently earns €17m a year after tax, and whilst he’d look well on a move to London, he wouldn’t want to lose the money on the three years of contract he has left.

It’s believe this would mean a one-off golden payment of €25m from Madrid to Bale, with Spurs then potentially giving him a new contract on around half the money. 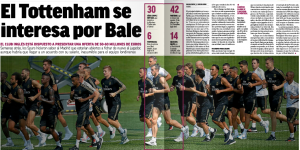 Marca then add: ‘In addition, the need to comply with the economic guidelines of FIFA requires them to sell €100m less than what they spend on transfers (they have spent €300m), so they need to sell players who do not count, like Bale, James or Mariano.’

This is something which only seems to be being rolled out in Spain.