Home Europe Player has ‘offer’ from Man City, club consider him ‘transferable’ as his...
SHARE

Real Madrid are in the process of trimming their squad after spending heavily to bring in a few new faces in the summer transfer window.

Isco is one of those whose future at Santiago Bernabeu remains uncertain.

Tuesday’s edition of Catalan newspaper Mundo Deportivo claims he has ‘offers’ from Manchester City and Juventus.

Pep Guardiola has long been an admirer of the Spain international and ABC reported last month that the former Barcelona manager has been trying to sign the 27-year-old since he arrived at the Etihad in 2016.

Zinedine Zidane counts on the former Malaga man, but the 13-time European champions consider the player ‘transferable’ as his sale could raise money for the club. 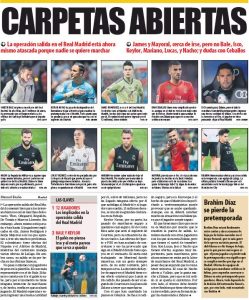 Isco has received ‘very important’ offers to leave, but he has no plans on making a move away from Real Madrid, even though his playing time will be limited next term.

The Isco to Manchester City rumour will never end, so this one is likely to rumble on until the window closes.