Aston Villa have already completed the signing of Wesley Moraes from Club Brugge and they’ve now set their sights on signing his former teammate Marvelous Nakamba.

Le Soir reported on Monday the midfielder has gone AWOL and hasn’t turned up for preseason training as he wants to force a transfer.

It was explained the Premier League newcomers have made a €10m bid and the Zimbabwe international felt his employer ‘disrespected’ him by not accepting.

Today’s edition of Belgian newspaper Het Belang van Limburg once again relays Dean Smith’s side have offered €10m for Nakamba, but Brugge are demanding €12m to sanction his sale.

Nakamba is currently staying in Paris and awaiting news about his future from his agent. 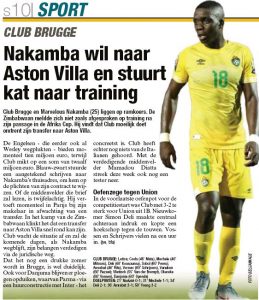 HBVL claims the player’s camp are of the belief the transfer to Aston Villa ‘can be done quickly’.

Brugge, on the other hand, are waiting for the situation to resolve and will take the legal route against Nakamba, if he decides to continue his strike.