Joao Mario to Wolves seems very much like a case of Inter Milan wondering where they can send the player, realising he’s Portuguese, and getting on the telephone to Jorge Mendes to see if one of his associated clubs is keen.

Mendes doesn’t directly represent the player, but with the agent thought to be doing other work with Inter this summer, a relationship seems to be building.

This looks to have been the trigger for Wolves being dragged into the equation, and it remains to be seen whether that’s because of information leaked to the Italian media or through an assumption which has grown.

Tuesday’s edition of Tuttosport says Mendes can now work on the deal, and Inter intend to loan the player to Wolves and for the Premier League club to have a buying obligation of €30m next summer.

That may be what Inter intend, and it sounds a great deal for the Milan club, but Wolves could think otherwise. A €30m fee isn’t cheap for Joao Mario and if he doesn’t do well in 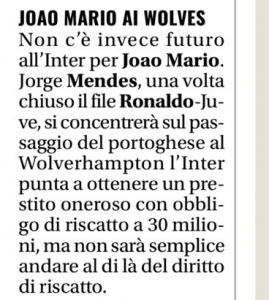 England next season then it would in hindsight seem to foolish to have agreed the figure.

Actually, it doesn’t need hindsight, Wolves would surely be able to get that amount down ahead of any agreement, or at least have a clause, if it must be an obligation rather than an option, only triggered if Mario plays a certain number of matches.

Even Tuttosport say it won’t be so simple for Inter.