There’s not a lot of sugarcoating to do on it, Guido Carrillo has so been a terrible Southampton purchase.

Mauricio Pellegrino wanted the signing, and the Saints backed him to the tune of £19m but it looked a big gamble even at the time. Carrillo, despite being a target man, hasn’t had a good scoring record in recent years and wasn’t getting a lot of joy at AS Monaco.

Carrillo failed to score a single goal in Southampton’s battle against relegation from the Premier League and once Pellegrino was sacked it was clear the player’s days at the club were numbered.

Now at Leganes on a loan deal, and reunited with Pellegrino, Carrillo sounds up for the challenge and is quoted by Spanish newspaper AS explaining why he’s chosen this transfer option. 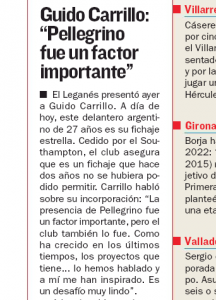 “The presence of Pellegrino was an important factor, but the club was also. As it has grown in recent times, the projects that it is here… we have talked about it and they have inspired me. It’s a very nice challenge.”

Southampton will clearly hope this new found inspiration can help guide Carrillo towards the goal, so they can get some of their money back in a future transfer window.