It’s a Sunday, so that means a Gareth Bale to Manchester United claim will come from somewhere.

Catalan newspaper Sport bring it this time as part of an article which, predictably, makes Real Madrid look in some sort of transfer chaos.

It’s claimed the future of the Spanish club is ‘a project full of doubts’ and ‘paralysed’ by a lack of clarity on what will happen with several players in the summer.

Bale is said to have been ‘flirting’ with Manchester United for some time, and Old Trafford is a reasonable destination given the amounts Madrid and the player will be looking for. 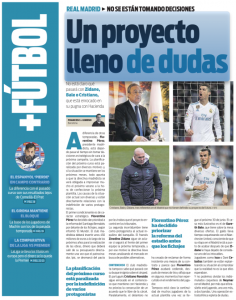 The Spanish media are also repeatedly linking Tottenham but that seems unlikely because of the financial jump it would take.

If Spurs don’t want to pay Toby Alderweireld what he’s asking for then it would take some leap of faith to believe they’d be able to get anywhere near what the Welshman is currently earning.

Jose Mourinho has made it clear he’s a fan of Bale, but he’s also made it clear Manchester United’s upcoming recruitment will be more focused on midfield than attack.

A transfer for Bale is looking increasingly likely, it’s just a question of where to.