Manchester City attacker Samir Nasri is coming under scrutiny in the Spanish media for a decline in form. The Frenchman is currently on loan at Sevilla, but is expected to return to England in the summer.

AS have reported on Sevilla’s trip to Barcelona tonight, and the number of injuries the Europa League champions are having to deal with. One of those picking up injuries has been Nasri, which has impacted on his performances in the second half of the season. Due to Nasri’s injury issues the Manchester City outcast has been labelled a ‘symbol’ of Sevilla’s problems.

Nasri impressed at the start of his loan spell with the Spanish side, and especially in Sevilla’s victory over Barcelona earlier in the season. AS are wondering if Nasri can put in a performance like that tonight, and he is now under pressure to produce in the Camp Nou this evening. 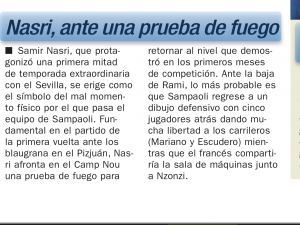 However, Nasri’s recent injury problems could be down to the fact Sevilla continued to play him despite carry niggles.

In November we reported on Nasri’s hamstring issues, which have been a problem for the player ever since his arrival from Manchester City last summer.

Due to Sevilla rushing Narsi back this resulted in the forward missing several games in November, and subsequently a dip in form. With the club unlikely to redeem the playmaker it seems they aren’t looking after the welfare of the player.

For Manchester City, the dip in form and the possibility of Nasri’s injury troubles increasing are serious worries. Future transfer value is hit, whether than be loan or permanent.