In the past couple of weeks, we’ve been covering rumours from Portugal which claimed Newcastle and Watford would be interested in Benfica goalkeeper Bruno Varela.

But as we all know, there’s a new English club who gets involved in the Portuguese transfer rumours. That’s Nottingham Forest.

Newspaper Record adds the Championship side to the race today, saying these three clubs have chances to land the player.

The outlet claims that Varela’s departure from Benfica should be solved this week, and his destination should really be England, with these clubs making the list of interested sides.

The Eagles are ready to listen to offers for the goalkeeper, and will be demanding at least €15m to let him go. 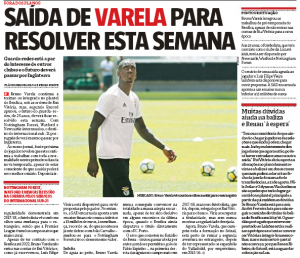 Record claims that the Premier League is his favourite destination, something that would obviously give Nottingham Forest a disadvantage.

But with Diogo Gonçalves and João Carvalho both signing for the club this summer, maybe he has enough motivation to do the same.

In mid June, another Portuguese newspaper, A Bola, dismissed the idea of Varela moving to Nottingham Forest, saying the option wasn’t being considered at that time.

Often when we share a Varela transfer story on social media, Benfica fans fill the mentions explaining how good the goalkeeper is and that he’s from the same talent line as Oblak and Ederson. They’re not being entirely genuine, just trying to talk the player’s value up and convince fans of others club that he’d be a good signing.