Home Championship Next Wolves transfer has been completed, another announcement on the way
SHARE

On Wednesday, Wolves announced the arrival of Rafa Mir at the club, signing for Valencia for an undisclosed fee, thought to be in the region of €2m.

The Championship club are busy this week on incomings and outgoings, and L’Equipe state another Wolves transfer was completed on Wednesday, but it hasn’t yet been announced.

Having travelled to France this week for talks over a loan move to Angers, Prince Oniangué has now completed that switch, according to the French newspaper.

In fact, L’Equipe don’t state whether it’s a loan or permanent transfer, but Wednesday’s claims had been centered around a loan for the 29 year old Wolves owned player. 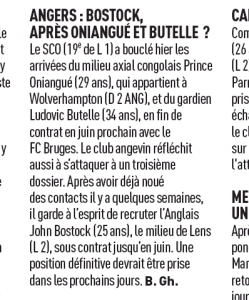 Angers need all the help they can get in their battle against relegation, and they’ll hope Prince Oniangué can provide a boost to the club’s efforts for the season.

There is no mention, and there has been no mention, on how much Angers may be paying Wolves.