Crystal Palace will need to part with more money if they want to sign Ibrahim Amadou, explain L’Equipe.

The French newspaper say reports from England indicate an offer of €14.5m has been made by Crystal Palace, which L’Equipe point out easily beats the €10m offer already submitted by Bordeaux.

However, Sky Sports on Wednesday spoke of a £16m offer arriving from Crystal Palace for the player, which is obviously quite a bit more.

Still, it’s not quite the €20m which L’Equipe say Lille want for the 24 year old, but it would appear the two clubs are edging closer to a potential transfer. 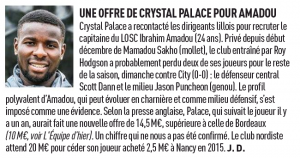 Ibrahim Amadou is a right footed defensive midfielder who can also play in central defence, he has a Lille contract lasting until June 2020, having only extended the deal in March of this year.

Roy Hodgson will be looking to add to his Crystal Palace squad this month in order to further strengthen the club’s fight against relegation.