Lewis Holtby is a free agent after Hamburg released him at the end of the last season.

That could soon change as Blackburn Rovers are on the verge of signing the 29-year-old.

On September 18th, we carried a report from Sport Bild, who explained the midfielder turned down offers from China and is close to joining the Championship side.

Later that day, Fussball Transfers explained the former Tottenham Hotspur and Fulham man was undergoing a medical with Rovers and is expected to complete a move to Ewood Park on Thursday.

According to Bild, the player uploaded a post to social media, which explained his trip to England. They also go on to claim the German said, “Good morning England. And here I am heading north over the M62 motorway. For my medical at Blackburn.” 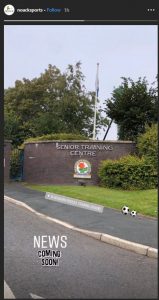 Holtby is managed by Noack Sports (as mentioned in the player’s official Instagram page) and the agency have uploaded a photo of Blackburn Rovers training ground in their latest status, with a caption ‘news coming soon’.

This is a clear indication Holtby’s move to Blackburn could be made official soon.