Marc-André ter Stegen has found himself in a growing German controversy.

The Barcelona goalkeeper has had the temerity to publicly say he’d like to be given chances for the national team. That’s been seen as questioning Manuel Neuer, who, according to himself and Bayern Munich, cannot be questioned.

Following Ter Stegen’s comments about his disappointment after not having a chance during the recent international break, Neuer questioned whether it was helpful to say such a thing to the media.

Barcelona’s in-form stopper hit back, suggesting Neuer’s comments weren’t appropriate and trying to draw a line under the simmering tension.

The Bayern Munich man went into a full rant after the club’s Champions League match on Wednesday, quoted by Bild as saying: “I think it’s a joke. Above all, I find the Munich press not in order. The West German press is extremely supportive of Marc ter Stegen, as if he has already won 17 World Championships. And I do not see any support from the South German press. I find it impossible to bring such a topic to the public, because he (Ter Stegen) has no right at all to play there.

“The goal is something different than the rest of the pitch. It must be clear who plays. Manuel Neuer is number one! He has been the best goalkeeper in the world for many years and has been out of action for a while due to injury. But it was clear that if he is back in shape – and he is now – there is no discussion that only he can be number one.

“Ter Stegen is a very good goalkeeper, but Manuel Neuer is much better and more experienced. He can play as long as he is healthy – he will always be the best.” 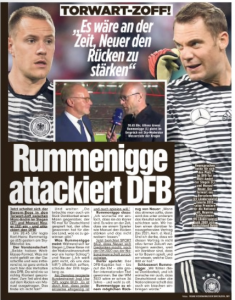 Neuer and Hoeneß clearly seem to have very thin skin on this one. The 33 year old Bayern Munich goalkeeper has spent a lot of time out injured in recent years and it’s not too controversial to suggest he hasn’t shown over a sustained period that he’s at his best level.

Ter Stegen, at 27 years of age, has been showing a great level for some time now, something he demonstrated again for Barcelona against Borussia Dortmund this week.