Ruben Semedo to Newcastle United has been one of the most popular transfer stories in the Portuguese press over the past week. One of the biggest reasons for that is Sporting’s willingness to sell the central defender.

Sporting need to raise funds, which is a situation they find themselves in most summers, and with Semedo being a fringe player worth a few quid, he’s one of the favoured exits. Pushing Semedo towards the English market is no surprise, given that Sporting will believe they can get the highest fee from there.

The original asking price, for a player with a €45m release clause, was €25m, but that soon dropped to €20m, and last week Newcastle reportedly made an offer of €14m plus €3m bonuses. 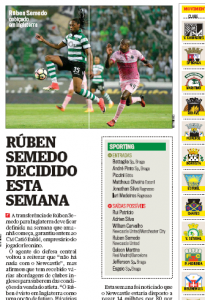 The player’s agent Caito Balde spoke to the Portuguese media and dismissed claims of an agreement with Newcastle, however, unlike some interpretations, he didn’t rule out interest. Portuguese newspaper Correio de Manha has spoken to him for their Sunday edition, and Balde expects an agreement to be found soon.

He once again stated there’s no agreement with Newcastle United at this stage, although it is England where the interest is coming from.

Correio de Manha expect the situation to be defined over the next week.