The desperation at Sporting to sell a big player this summer is becoming increasingly clear. Often in financial trouble, the Lisbon club seem especially keen to sell early this year, and they’ve put three ‘captains’ of the club towards the market.

Those are goalkeeper Rui Patricio, and midfielders William Carvalho and Adrien Silva. The latter is most interesting Tottenham, believe Portuguese newspaper A Bola, but that link is based on hardly anything at all, as we explained on Saturday. Sporting are awaiting a firm proposal, they’ve probably got a long wait ahead.

A keenness to push Adrien towards Tottenham and Mauricio Pochettino, for no apparent reason at all, further underlines the Sporting wish, and perhaps growing need, to sell big this summer. 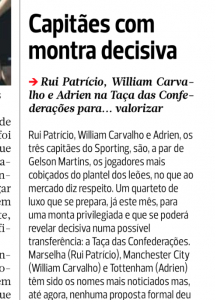 Whilst Pochettino interest in Adrien may be exaggerated, or even fabricated, it may be worth Tottenham and others having a look around to see if there’s any bargains to be had at Sporting.

Tottenham aren’t one of the Premier League clubs who scout the most in Portugal, making their interest seem even weaker.