Home Premier League Arsenal Surprise as Man City ‘not in a position’ to pay €50m, as...
SHARE

The Catalan press are prepared to distort reality in their quest, on behalf of Barcelona, to sign Hector Bellerin. For months the line was that if Arsene Wenger conitnued as manager at the Emirates, it would be pretty much impossible to sign the right back.

Now, faced with the reality of Wenger signing a new two year contract, the Catalan media had two choices: Give up, or pretty much ignore a lot of what they’re said previously.

Guess which route was taken?

Manchester City have long been reported as Barcelona’s rival for Bellerin, and as Sport went with another big splash on Sunday it was inevitable Pep Guardiola’s men were dragged into the equation. 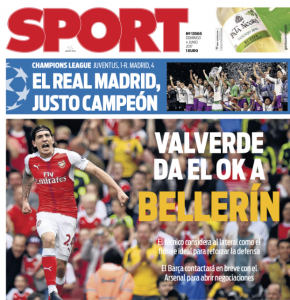 Sport say Arsenal would ask an ‘astronomical’ figure for Bellerin, which is put at €50m, something sounding strangely reasonable in the current market, especially given the player’s long contract.

What is surprising is Sport saying Manchester City are ‘not in a position’ to pay such an amount for a fullback.

Previously the way to talk down Manchester City interest, at least for the Catalan press, was to point out Arsenal wouldn’t sell to another Premier League club, which made more sense.

Back to Barcelona, Sport claim new manager Erensto Valverde has given his full backing to the Hector Bellerin plan. Now, even Sport concede, the real difficult process will start.