Newcastle United are the latest English club to be linked with Marvin Zeegelaar, and almost certainly the most tempting for the player so far. During the January transfer window, the Sporting fullback was repeatedly linked with a move to Norwich City.

At one stage it looked a matter of time before Zeegelaar signed for Norwich. The Championship club agreed a €3.5 fee with Sporting, which would have risen to €3.75m with bonuses.

The Dutchman was expected to fly to England, but he snubbed the move, because he didn’t feel Norwich had a good enough chance of promotion. If Newcastle had made an effort in January, they would have been a more attractive proposition, and even more so now.

Hull City were credited with interest earlier this week, and Record, who bring Newcastle United into the equation, mention the club again. Hull City remain best placed, but Newcastle are ‘evaluating’ the situation. 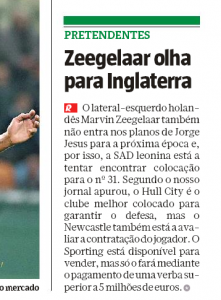 Sporting want €5m, and if Newcastle offered such an amount then the deal would be easy to do, with Zeegelaar eyeing Premier League football.

Newcastle did send scouts to Portuguese matches last season, although it would be wrong to say they were one of the English clubs who scouted there most. And it was Porto, rather than Sporting, who Newcastle seemed to have the greater interest in.

Marvin Zeegelaar is a 26 year old left-back, and surplus to requirements at Sporting.