Belgium newspaper Het Laatste Nieuws now claims the Tyneside club have given permission to the shot stopper to travel to France so that he can complete a switch to Stade de la Meinau this summer.

The 26-year-old is currently undergoing his medical tests and will then sign a four-year deal with Thierry Laurey’s side. The Belgium international’s impending move to the Ligue 1 was also reported by today’s edition of L’Equipe.

The French publication reports there are still a few details left with the Premier League outfit, but the player should join Strasbourg, where he will sign a four-year deal 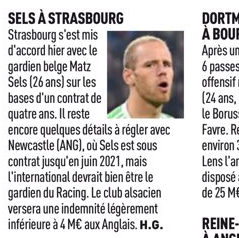 On Wednesday, it was reported Rafael Benitez’s side will earn around €4m from the sale of their keeper.

Today’s report suggests Strasbourg will pay less than the above mentioned fee to Newcastle to secure Sels’ signature.

Arsenal have ‘officially asked’ for midfielder – Club ready to sell for €20m+, ‘channels are open’

Arsenal have ‘officially asked’ for midfielder – Club ready to sell...