On July 24th, Belgian newspaper Het Laatste Nieuws reported Anderlecht decided against signing Matz Sels after they failed to agree a fee with Newcastle United for the goalkeeper.

He has three years left on his contract with the Premier League outfit.

The shot stopper is aware that he has no future under Rafael Benitez at St James’ Park, and knows he needs to find a new club after his desire to join Anderlecht on a permanent deal collapsed.

The Magpies custodian has emerged as a transfer target for French club Strasbourg. HLN also mentioned the 26-year-old has a ‘personal agreement’ for four years with the Ligue 1 outfit.

Today’s edition of French newspaper L’Equipe claims the former Gent man is interested in the project of Thierry Laurey’s side. Strasbourg have been moving on the Belgian keeper 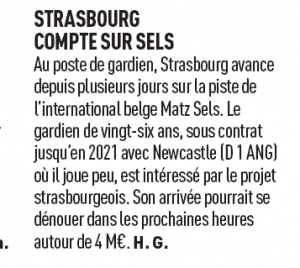 Sels’ arrival at Stade de la Meinau could be resolved in the ‘next few hours’. The report claims Newcastle will earn €4m from their player’s sale.