Home Premier League Southampton exit will be announced as soon as medical and ‘last letter...
SHARE

Jordy Clasie is returning to Feyenoord on a season long loan.

The Dutch club have managed to get their way after tough negotiations with Southampton.

For a while it’s felt like Feyenoord have been cocky about getting their former player back, despite Southampton’s initial demands. The Saints were looking for a permanent transfer and asking for most of the money they paid for him in the first place.

In the Netherlands it was repeatedly insisted that Clasie would only accept a return to his former club, and that put the Premier League side in a difficult situation and has ultimately forced them to go along with things.

After a difficult loan move to Club Brugge, there were hardly going to be a line of better options anyway. 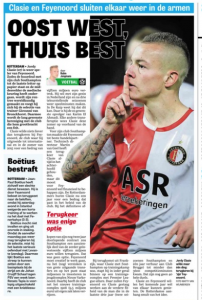 De Telegraaf reports that as soon as the ‘last letter of paperwork’ is done and a medical passed, the loan will be confirmed by the Eredivisie side.

Feyenoord are loaning the midfielder for ‘an amount which fits the policy of the club’.

“The man is nearly at Tottenham” – Claim striker now ‘closer’...