Victor Camarasa impressed during his loan spell at Cardiff City last term, which has seen the 25-year-old draw attention from Premier League clubs.

On August 1st, we carried a report from Marca, who claimed there’s ‘strong interest’ from Crystal Palace in the Real Betis midfielder.

It was also explained the leaders of the Selhurst Park club travelled to Seville to speak with the La Liga side about signing the Spaniard.

This has been reported once again by AS in today’s edition of the newspaper. In addition to the Eagles, West Ham United and Burnley also get a mention as the Hammers and Sean Dyche’s side have asked about Camarasa. 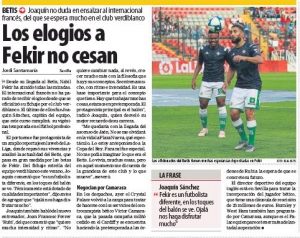 However, Palace seem to be ‘more advanced’ than West Ham and Burnley.

Camarasa is currently training under the instructions of Rubi and is waiting for his future to be settled. He has a release clause of €25m in his Betis contract.

On Thursday, it was also reported he’s not very keen on a move and would prefer to stay at his club, but Betis may think otherwise.