Anderlecht’s interest in signing Leeds United’s Kemar Roofe has been widely reported in the British press in the last few hours.

Belgian newspaper Het Nieuwsblad have also talked about interest from Vincent Kompany’s side in the striker in today’s edition of the newspaper. They have got this information from English sources.

The report further explain Anderlecht have would have already contacted the 26-year-old.

Leeds’ leading goalscorer from last season has a year left on his current deal and his contract situation makes it an ‘interesting track’.

The Whites, however, want to offer him a new deal. Should he turn it down, the frontman could leave Elland Road for a fee of around €7m this summer.

Anderlecht would find the quoted price affordable, but they could face competition from West Bromwich Albion and Rangers. 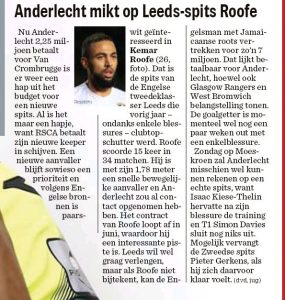 The Baggies and Steven Gerrard’s side have shown interest in the player.

That competition would be considered serious by the Belgian club.