On August 1st, we covered claims from Spain that Barcelona had made ‘new contact’ with Real Betis for Junior Firpo, and there was optimism the left-back’s move to the Camp Nou could take shape.

That no longer seems to be the case, according to Friday’s Mundo Deportivo. Despite several contacts, there has been no substantial progress to uncork the operation.

Barcelona CEO Oscar Grau discussed the Euro U21 winner with Betis’ general director, Federico Martínez, in Madrid on Wednesday and he returned without good feelings.

Earlier reports indicated Betis need €20m plus €7m in variables, but the La Liga winners are only willing to offer €18m plus €5m in variables for Junior.

Mundo states Betis have increased their demands as they now want a fixed fee of €25m for the player. This has ‘significantly cooled’ the negotiation.

The Blaugrana confirmed the meeting, but denied they made a formal offer of €15m for the fullback. 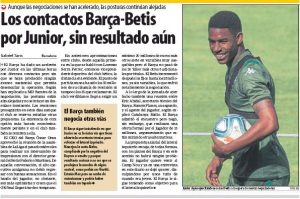 Junior, on the other hand, wants to join Ernesto Valverde’s side, but it’ll only be possible if the two clubs find an agreement.

Due to the current situation, Barcelona are looking for cheaper alternatives to strengthen the left-back position for the new season.

“If Liverpool come knocking, it will be difficult” – Tough for player to turn down Reds, belief he’ll stay ‘a little longer’

“If Liverpool come knocking, it will be difficult” – Tough for...