After struggling for regular playing time in his debut season, it was known earlier in the window that Malcom’s future was likely to be away from Barcelona.

Everton have been regularly linked with the winger this summer, but Zenit Saint Petersburg have managed to beat the Toffees in signing the winger.

Two days ago, Sport explained Marco Silva’s side submitted an offer for the Brazilian and they were trying to persuade the 22-year-old to opt for their project. Details of the Premier League club’s offer weren’t reported.

Mundo Deportivo have the latest on that matter as they claim Everton tabled an offer of around €35m for Malcom.

There is no mention if this is the overall cost of the operation or if it’s the fixed amount, with potential bonuses on top.

Ernesto Valverde’s side ‘didn’t contemplate’ the Premier League club’s bid after receiving an offer from Zenit. 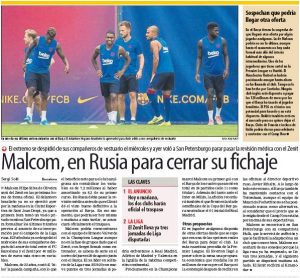 Mundo states the Russian side and Barca found an agreement for Malcom’s transfer for €40m plus €5m in variables.

He’s set to complete his move to Zenit today or tomorrow.