After a limited role in his debut season at Barcelona, Malcom wants to leave the Camp Nou this summer and has been heavily linked with a move to Everton.

On July 30th, CalcioNapoli24 claimed the Toffees are behind Zenit Saint Petersburg in the transfer race for the winger.

A headline on Wednesday’s edition of Sport reads ‘agreement imminent for Malcom’.

Within the story’s it’s explained Zenit are getting ‘closer and closer’ to the demands of the La Liga winners (€40m plus €5m in variables). It’s stated Malcom also prefers a move to Russia over making a switch the Premier League.

Zenit are offering the 22-year-old a net salary of €6m per year, which no other European club will be willing to offer him. 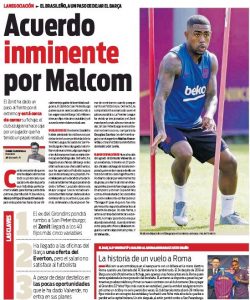 In the past few hours, an offer from Everton arrived at Barca and Marco Silva’s side pressed the player to opt for their project over that of Zenit.

Malcom, for his part, has already decided and ‘declined’ the proposal made by the Merseyside club.

However, it’s worth making clear that earlier this week the Russian club’s president spoke publicly and said there was no way Zenit would be paying €40m, feeling it’s too much.