Real Betis’ Junior Firpo is identified as one of the left-back targets for Barcelona, and on July 30th we covered claims from Spain that €5m separates the two clubs for the transfer.

Mundo Deportivo now explains the defender still remains a ‘firm option’ for the La Liga winners, but they are also looking at other targets.

In recent hours, there has been a setback in signing the left-back due to Betis’ high demands. They are demanding €20m fixed plus €7m in variables. Betis need funds to sign Borja Iglesias, who has a €28m release clause in his Espanyol contract.

However, Barca are unwilling to take the overall cost of deal beyond €23m (€18m plus €5m in variables), so €4m is what’s separating the two clubs now.

Talks between Betis and Barca will continue, but ‘impending white smoke is not expected’.

Betis gave Junior permission to negotiate with Barcelona and his salary demands fit into the scheme of things at the Camp Nou. He is now awaiting news regarding his future. 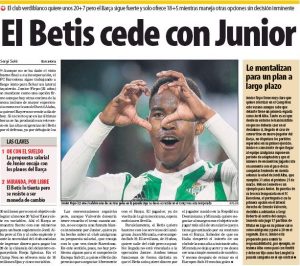 Barca want a backup for Jordi Alba and if they fail to sign Junior, they will be forced to look elsewhere.