On July 26th, Mundo Deportivo explained that Arsenal and Everton are among the ‘best placed’ clubs to sign Malcom.

Three days later, the same newspaper reported Barcelona have slapped down a €50m asking price and the Toffees have ‘approached the figure’ demanded by the La Liga winners.

On Monday, there were reports about Zenit St Petersburg submitting an offer for the winger and Mundo Deportivo takes a look those claims in today’s edition of the newspaper.

It’s stated the Russian club are interested in the 22-year-old, but no official offer has arrived at the club so far.

Barcelona invested €41m to sign Malcom in 2018 and want to recover the amount they paid to Bordeaux.

Ernesto Valverde’s side have already informed the player that he will get to decide where he wants to play next season, provided potential suitors meet their asking price.

Mundo claims that apart from Zenit, Arsenal, Everton and Borussia Dortmund have also ‘shown their intention’ to bid for the South American. 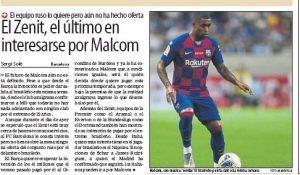 With Marco Silva’s side and the Gunners joining other clubs in chasing Malcom, Barcelona’s idea is to offload him this week. However, no club is at an advanced stage to acquire his services.