Bayern Munich rekindled their interest in Chelsea’s Callum Hudson-Odoi recently, more than 18 months after they failed to sign him in January 2019.

The treble winners, once again, failed in their efforts to sign the Blues winger.

This week’s edition of SportBild details why the Bavarian club decided to walk away from signing the England international and then take Douglas Costa from Juventus instead.

Due to the Covid-19 crisis, the Bundesliga winners decided to sign players on ‘low to no transfer fees’ and offer moderate salaries.

Bayern maintained ‘great interest’ in Hudson-Odoi and Hansi Flik publicly discussed his admiration of the 19-year-old.

The German champions went on the offensive for the player and their sporting director, Hasan Salihamidžić, had ‘already phoned Chelsea director Marina Granovskaia’.

He even called the Premier League club chief after their 4-0 win over Crystal Palace last weekend.

Granovskaia has a reputation of being a tough negotiator and SportBild adds the Bayern chief experienced it first hand. 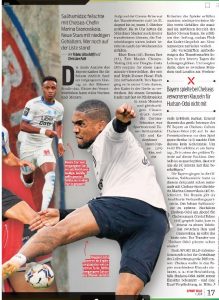 As per the report, Chelsea wanted to insert ‘various clauses’ as part of the deal, which included a ‘penalty’ if Hudson-Odoi didn’t get enough opportunities, and a ‘purchase obligation of €77m’ if he had made a certain number of appearances.

Bayern felt the loan move would later be converted into a permanent deal.

From the outset, Flick’s side thought signing Hudson-Odoi would have been a ‘costly transfer’, which is why they ‘exercised common sense and broke off the talks on Saturday evening’.