­Late drama is par for the course on deadline day, and this year it was Arsenal serving it via ­their move for Atletico Madrid midfielder Thomas Partey.

The Gunners late decision to pay the Ghanaian’s release clause and get Mikel Arteta the man he’d been after for most of the summer provided all the excitement that we’ve come to expect from the end of the window.

The move was undoubtedly a surprise one from Arsenal, who despite having had interest in Partey for several months, had always maintained they didn’t want to pay his release clause.

And it seems, like the rest of us, the midfielder wasn’t expecting the move to happen either, with Marca providing a bit of background on the transfer today.

They explain that Partey only found out about the move on Monday morning after Arsenal had phoned his representatives at 2am on Sunday to let them know their intentions.

This led to a ‘frantic Monday’ that concluded with his €50m release clause being paid at La Liga headquarters and him signing a five-year deal at the Emirates.

Up to that 2am phone call, neither Partey nor his agent ‘could have imagined’ that Saturday would see him play his last game for the Spanish side.

They were fully expecting him to stay but ‘everything began to change’ when that call came in from Arsenal in the early hours.

They made it clear they were paying the clause and so on Monday morning Partey’s agents presented it to him. He was ‘forced’ to decide on the spot and advised by his agents, he accepted an offer that ‘undoubtedly’ improved his wage packet ‘considerably’.

As well as that, the midfielder was ‘convinced’ that Arsenal recognised his importance, something that he wasn’t feeling from Atlético. 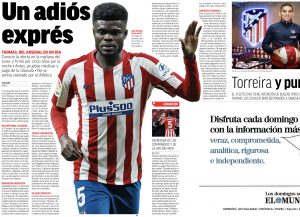 Thus he ended up living a ‘frenetic afternoon’ on Monday, with Arsenal depositing the money at 2pm and him then heading to Anderson Clinic in Madrid to undergo a ‘thorough medical examination’ before then signing his new contract around 10pm.

He’s now heading on international duty with Ghana before joining his new club, and Marca say he will do so with a ‘clear conscience’.

They explain that despite the negative reaction in Spain, particularly at Atlético, the midfielder does not believe he has done anything wrong or underhand.

While he didn’t speak to the club personally, he knows that once Arsenal deposited the money at La Liga, the Spanish club would have been aware of the transfer.

Secondly, he does not believe they made a ‘sufficient effort’ to keep him at the club during contract negotiations and knows they’ve signed a replacement in Lucas Torreira anyway.

So, he will head to the Emirates with a clear conscience after a frantic, last-minute deadline day move full of all the drama we’ve come to expect.