Oh Cristiano Ronaldo to Manchester United, so you return like an old friend for the summer.

It’s annoying isn’t it? But it’s too ‘everywhere’ to ignore right now, and whilst we wrote at length yesterday about what’s likely behind Ronaldo’s latest Real Madrid strop, the transfer rumours are now in full swing.

Spanish newspaper Marca, who are Real Madrid leaning, have several articles about Ronaldo’s situation in their Saturday edition. One of those focuses on destination, with Manchester United and PSG picked out.

Marca make a very clear pointing of saying that, despite Jose Mourinho and Ronaldo not getting on in the past, there’s no issues between the pair now. They’ve been informed that Ronaldo would therefore have ‘no problem’ joining Mourinho at Manchester United.

That makes some sense. Sure there are historical issues, but it wasn’t huge, and with Jorge Mendes being so close to both it would be hard to believe if they hadn’t managed to sort it out and become positive towards each other. 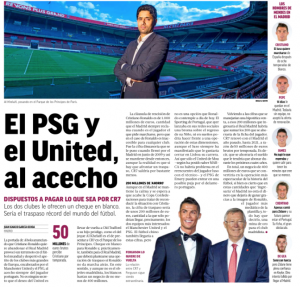 Any deal would likely cost around €200m in transfer fee, and then a further €200m in wages. Some of that could be offset with the huge commercial advantages having Ronaldo brings, and surely any club buying the Ballon d’Or winner would seek such assurances from current partners.

Ed Woodward would be in his element at Manchester United.

All of that said, one would think the most likely outcome of this saga is that Cristiano Ronaldo remains at Real Madrid.