This is a strange one.

Saturday’s edition of Marca links Chelsea with Sevilla’s Sergio Rico. In fact, the Spanish newspaper strongly links Chelsea to the player, saying there have already been advances and the Premier League club would have ‘no problem’ paying the player’s €30m release clause.

The big problem here is that Sergio Rico is a goalkeeper. And, with that in mind, it would seem extravagant of Chelsea to pay €30m for someone who would surely be back-up to Thibaut Courtois.

Three of the teams to ‘have asked’ for Rico are English, with only Chelsea named, and all would have ‘no problem’ meeting the buyout clause. Another, unnamed, team are also 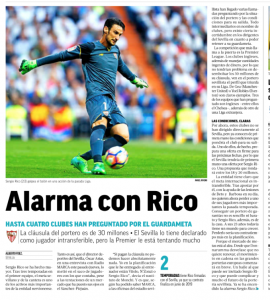 keen, and they’re neither Spanish or English.

Maybe this is an attempt to up the profile of Rico, or perhaps Chelsea are interested and they feel a deal could be done cheaper than the stated price.

The 23 year old has already been capped for Spain and could provide good back-up, and potentially serious competition, to Courtois.